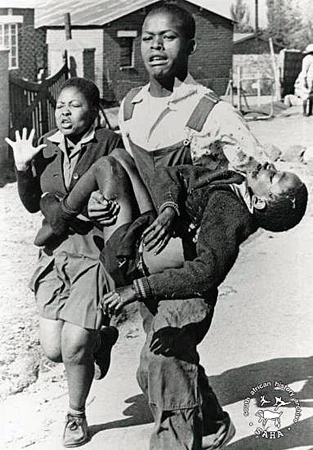 This photo shows Hector Pieterson, age 13, being carried away after he was shot during the Student Uprising in Soweto against South Africa’s apartheid regime.

The uprising began as a peaceful protest march organized by students. They were protesting the use of the Afrikaans language, regarded as the language of the oppressor, as a medium of instruction in all African schools.

At the beginning, a fairly small number of students took part in this peaceful protest march. Police confronted the marchers and ordered them to disperse. The confrontation quickly turned violent. There are conflicting accounts of who gave the first command to shoot, but soon children were turning and running in all directions, leaving some lying wounded on the road.

What began as a student march, quickly erupted into an uprising, which spread throughout Soweto and then to other parts of South Africa.

The 1976 Student Uprising changed the course of South African history and accelerated demands for justice. After South Africa’s first democratic election in 1994, 16 June was declared ‘Youth Day’ to commemorate the contribution made by South Africa’s youth to the struggle against apartheid.

For more information on youth contributions to the Soweto Uprising click here.