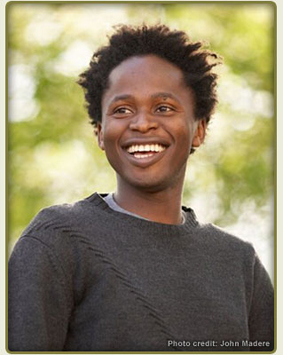 Sierra Leone’s civil war began in 1991. Rebels invaded Ishmael Beah’s hometown and he was forced to flee. Separated from his family, he spent months wandering with a group of other boys. At the age of 13, he was captured and forced to fight for the government army. He did this for three years until he was rescued in 1996 by UNICEF.

Ishmael was invited to speak to the UN Security Council on the issue of child soldiers. In his speech he explained the reality of the situation for young people inside these situations where they are often forced to take drugs and commit atrocities.

During a 14 February 2007 appearance on The Daily Show Beah said that returning to civilized society was very difficult. He spoke of the compassion and patience of one volunteer, Nurse Esther. She recognized his interest in American rap music and gave him a Walkman, helping him to use music as a bridge to his past, before the violence. Slowly, he accepted her assurances that “it’s not your fault.”

“If I choose to feel guilty for what I have done, I will want to be dead myself,” Beah said. “I live knowing that I have been given a second life, and I just try to have fun, and be happy and live it the best I can.”

For more information:
Interview with Ishmael on The Hour (09:45)