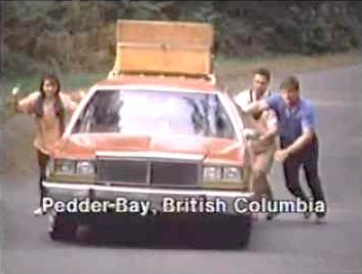 SAGE Tour: Canadian Youth make a “pledge for the planet”

In 1986 four Montréal students set off for a tour of Canadian secondary schools that took them from St. John’s to Victoria. The Youth Nuclear Disarmament Tour was organized to inform students about the threat of nuclear war; to provide a forum for discussion, and to encourage local youth to form peace groups.

The four students were Seth Klein, 18, Alison Carpenter, 17, Maxime Faille, 17, and Désirée McGraw, 16. They were all members of Students Against Global Extermination, a Montréal organization run entirely by students. They said that education on this issue was too important to leave only to schools. One of the four had a driver’s license, so off they went in an old station wagon.

When asked why they were doing this, they said that they believed that the “facade of apathy” could be changed, that through information and action, youth can reinforce their sense of empowerment and responsibility. SAGE encouraged young people to make a “pledge for the planet,” promising never to vote for a candidate who does not support disarmament.

By the end of the tour, they had spoken directly to over 100,000 students.

An example of their impact: While they were visiting a town in Ontario the provincial legislature was voting whether they should declare the province a nuclear weapon free zone (NWFZ). It seemed that the local representative was going to vote “no”.

However, the SAGE leaders urged students to contact the member’s office and say, “I am not old enough to vote in this election, but I will be in the next one and I want you to vote “yes” to NWFZ. The next day the SAGE youth phoned the member’s office and asked if there had been any calls on this issue. The assistant said that they had rarely received so many calls on an issue. The member voted “yes” to NWFZ.